We are very excited about the Buffalo Hockey Experience + Museums recent acquisition for the collection of two vintage Buffalo Bison hockey jerseys from the 1930's, a 1931-32 Championship jacket and a bottle cap jersey from the 1969-1970 season (the famous bottle Pepsi design everybody loves). These pieces are a welcome part of the the BHE+M's permanent collection.
Hopefully we will get these out on display for you guys. 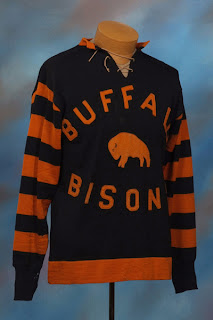 This black and orange uniform was worn most likely during the Bison's first championship season. As members of the International Hockey League in 1931-32 the Bisons led the league with 59 points and defeated Detroit 2-1 in the round robin playoffs to claim the IHL Championship beating out the Windsor Bulldogs. This win was redemption for the Bisons who had lost the the 1930-31 Championship to the Bulldogs putting to rest the "Windsor Jinx". 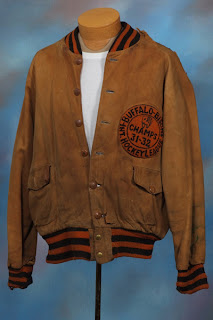 This jacket was used to commerate the Bisons Championship in 1931-32. In the book Before the Blade by Tim Warchocki thereis a 1933-34 team photo with the team trainer wearing a jacket identical to this one. 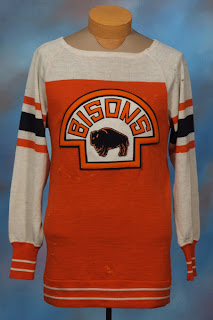 This stunning orange uniform was worn during the Bisons shortest season, only playing 11 games in 36-37. The season marked the first season of the American Hockey League. The Bisons suspended operations on December 10, 1936 and  didn't return to the ice until the Memorial Auditorium was opened in the fall of 1940. 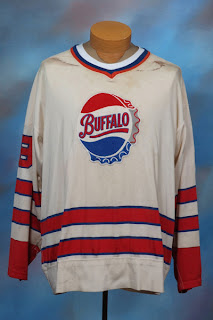 This uniform was worn by defensman Larry Hornung during the Bison's last season and last AHL Championship. The jersey was  worn during the Bisons last game at Memorial Auditorium on May 10, 1970 a 6-2 victory over the Springfield Kings. This uniform is one of the most sought after because of its great colors and beautiful logo. The logo was designed by the Pastor brothers who owned the local Pepsi Cola bottling company. These jerseys also have a significant place in Buffalo Sabres history, they were worn during the Sabres 1970-71 inaugural season preseason games and throughout training camp.


OTHER VINTAGE BUFFALO BISONS ARTIFACTS ACQUIRED
"Not pictured above, these new find for the collection includes a game used and team autographed stick from the 31-32 Championship team, two game programs from the 36-37 season including the last game December 8, 1936 a 2-1 victory over the Springfield Indians and several pieces from the Bison's final season which will greatly enhance any display," added Dr. Joe Gambacorta.